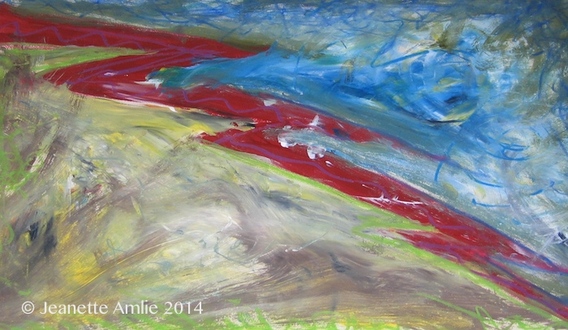 Many of us have repressed emotions held within us from our childhood, even if we had a relatively loving experience growing up. By midlife, this held energy in our nervous systems will generally find some way to begin to express itself, whether it be depression, mood swings, headaches, digestive problems, skin problems or a plethora of chronic ailments including chronic fatigue and fibromyalgia. Often these conditions persist despite our attempts to alleviate them through talk therapy, bodywork, medical interventions or spiritual practices.

My experience tells me that the reason that these conditions often persist is that the held energy and associated distorted beliefs that are causing them have not been released at the origin….which is in our nervous systems and our minds. So then, how do we access this held energy? For me it has required processes that access and express both the felt sense of the repressed emotion, as well as simple dialogue that allows access to the distorted belief without the censoring of our minds. Much of this can be done ourselves, but in the end, these conditions generally arise due to our interactions with other human beings, and so the final step is almost always working through this with someone else that we trust to see and hear what we cannot.

This is how the process of Creative Awakening arose. During my Masters degree program in psychotherapy I spent the first year training in art therapy. Although I did not ultimately choose Art Therapy as my profession, I knew from my training and my own experience drawing that art was in itself therapeutic and able to open doors that the mind had sealed shut long ago. This flowed quite naturally into body/energy work and then into somatically based trauma therapies. Yet none of these processes alone seemed to get to the core of what I was still dealing with.

I had spent my life in the arts in one form or another. Yet early in my undergraduate art training I had a bad experience in one of my classes that resulted in me quitting painting for 33 years. I found many other ways to express my creative urges, but they all became abstract or craft based. This continued for decades until I prematurely terminated my career in the field of hand paper making by disabling my arms in the process of trying to work myself to death. Little did I know the unconscious, repressed emotions, beliefs and experiences that were driving this self-destructive behavior.

Only at this point was I finally ready to begin drawing again, but this time it was strictly for the purpose of discovering what lie buried within me causing my apparently permanent arms injuries. A wonderful book called “Visual Journaling” had been introduced to me that had simple exercises that were designed to allow us to access and express the emotions we held within us. It was a very simple process and did not require me to have any professional assistance for my inner explorations. What came out astounded me! Yet I had no intention of ever sharing this work with anyone.

Fast forward to a decade later that involved every type of experimentation I could imagine trying to put all of this together, still trying to resolve my own inner conflict. At one point I realized I had to start painting again or I would literally die. So I began with basic acrylics on little canvas boards and slowly moved into the oil painting process that I had loved when I quit painting so many decades earlier. This was deeply satisfying to see the powerful images that emerged and get such positive praise from the people I cared about. Yet something was still grating inside me.

Finally one day I decided to use the cheap acrylics (that I didn’t like for making ‘real’ paintings), and oil pastels on large paper in order to ‘get out’ what was festering inside me. The first image resulted from the process of drawing on black paper that I was already familiar with, and although I combined it with tempera paints, it still wasn’t getting at the pent up energy. Then I realized that I was still trying to render a concept I had in my head of the anger and rage I felt within me, which resulted in an impressive image, but the content disturbed the hell out of me! 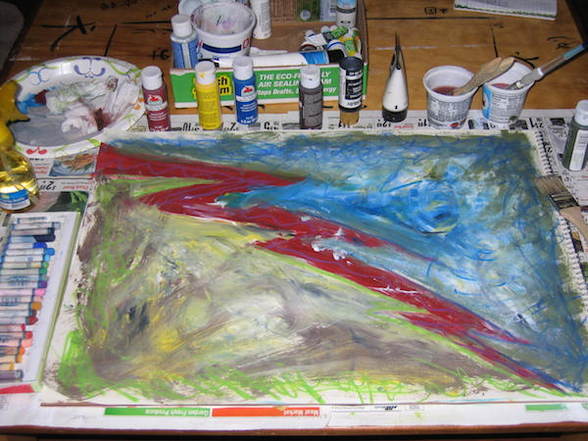 At this point I realized that there must be another way to let the anger itself do the painting. This was when I realized the perfect combination of the cheap acrylics and oil pastels on the large paper. It was essential that I have a large space to paint that I didn’t have to worry about being neat or clean, so I covered a large table with newspaper and had at it. The beauty of these mediums is that you can find inexpensive paints and pastels in a wide variety of colors so that you don’t have to worry about mixing paint. Then it was time to squirt, mark, smear, brush and smudge, without any though about imagery, until the energy within me was spent. This is why it is important to make sure you are using large paper (18 x 24” or larger if you can), so that your body is doing the creating rather than your mind. And it is essential that you FEEL YOUR BODY while you are expressing so that you are aware of the ways the energy is shifting and changing.

Once done with the painting, I knew the very first thing to do was to sit back and FEEL MY BODY. So I noticed any signs of discharge like twitching, deep breathing, tears/laughter, tingling, energy streaming etc. I allowed this process to continue until I felt calm. Then it was time to look at my creation with the curious and non-judgmental eyes of a child, again noticing what I FELT IN MY BODY! This part is crucial because two decades of trauma therapy have shown that it is this awareness and tracking of our somatic (felt) sensations in the body that releases the charge of the energy at it’s source and allows a rewiring of the brain and an uncoupling of the distorted beliefs that accompany the emotions and sensations.

Often time it is at this point, alone or with a guide, that we can begin to dialogue with our creation. From this calm state of mind and body we are more receptive to the deeper inner guidance that can reveal the inherent wisdom and insights that we ourselves have held within us all along. Asking simple questions of the creation and noticing if there are areas that draw your attention can be very useful and the answers that come forth can be quite surprising and profound. Often this is a good time to have a journal handy or to simply write the messages on the back side of the creation. It can also be amazingly therapeutic to slowly put your hands on the creation and really feel it. Try one hand then the other, noticing any attraction or resistance that you feel and pause until the energy resolves itself before continuing on.

As I did this process myself I realized that the first drawing was steeped in the distorted beliefs I held that were coupled with the repressed anger. What I was drawing was actually the belief that reinforced my aversion to the emotions I felt. Of course I would be frightened if this was what I held within me! But what I discovered in the second drawing was that when the anger itself was allowed to be expressed, something quite different came forth. As I looked with astonishment at the second creation what I saw was immense power and beauty. I knew that this was the true face of the undistorted emotion and the key to releasing it from the dungeon I had banished it to. This realization was accompanied by a flow of energy within my body and mind that felt both energizing and freeing. This was what I had been trying to get at all along!

So then after the process feels finished it is good to set the creation aside for a little while and simply tend to whatever your basic needs are at the time. You may feel the need to sleep, or eat or connect with nature or other people. Regardless of what it is, as long as it is not harmful to yourself or others, allow yourself to nurture yourself for a day or two if needed. Then when you feel ready, by yourself or with someone you trust deeply to see and hear you on a soul level, bring out the creation and sit with it once again. It is not uncommon for us to create an image (or total abstraction for that matter) that we do not understand at the time, but that begins to reveal hidden insights later on. I have even had the meaning of drawings become clear years later, as if they were a premonition of what I would experience later when I was ready.

If you feel like this process is to destabilizing to do alone you can always seek a trained therapist, counselor, guide or art therapist to help support you as you venture into this deeper, unconscious terrain. Yet with this simple process, we can often open the door to a level of inner guidance that felt inaccessible before. So trust yourself to know what is best for you and know that the Universe will offer the support you need if you but ask for it. Then stay open to how the answer comes, because it is often not what we expect or are looking for…….